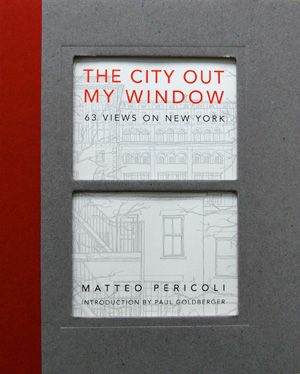 The City Out My Window: 63 Views of New York

by Matteo Pericoli with an essay by Paul Goldberger

The City Out My Window: 63 Views of New York is the second book by Matteo Pericoli to which Paul Goldberger has contributed a text essay. Pericoli asked 63 New Yorkers, including Tom Wolfe, Stephen Colbert, Mikhail Barishnikov and Philip Glass, if he could sketch their window and what they see from it, and then to comment on what they see. The result, Paul Goldberger says in his essay, “is a rumination, or a series of ruminations, on the inner thoughts people have about the place they live in and how it relates to the world. The City Out My Window is also, of course, a kind of primer in miniature about urban architecture.”